A year ago this weekend I ran my first ever race, the 5k Mo Run. You can read my race report if you want, and you’ll see that I was pretty nervous for the race, but also excited. I ran/walked that race in 46:15.

This year I decided to run the 5k again, for nostalgia mostly but also to hit a target time that thus far, I have been unable to hit.

In my one and half years of running, and one year of racing, I haven’t been able to crack that sub-40 time.  I’ve come close, but it has always taken me over 40 minutes to run 5k.  But I’ve been doing really well at getting out and running in the last few months.  I’ve been working with a personal trainer twice a week and I definitely feel like I’m a better runner for it. I’m enjoying running so even though I wished I were faster, I was still happy to just BE running.

But was I settling into a comfort zone? Shouldn’t I start pushing myself? Could this race be a test? Could I run the whole thing without stopping? Could I run it in under 40 minutes?

Those were the questions I was asking myself while I was getting ready this morning.  I followed my usual pre-race routine; up early and had breakfast 3 hours before the race, left the house 2 hours before, got to the race an hour before and then just soaked up the atmosphere until it was time to line up at the start.

Today it helped that it was a cool, clear day after two days of rain and flooding.  The grass and ground were really waterlogged so we were all squelching around! But what a beautiful day, and a beautiful place to run in. 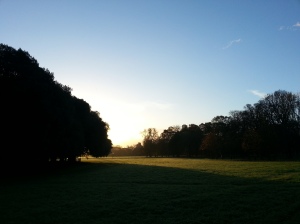 I had an hour to spare at the start so I just wandered around, thinking about my goal for the day and really wondering if I could pull it off. I knew that in order to run 5k in under 40 minutes, I would have to run at a pace of 8min/km or under. I’ve never run that fast before and even when I think I’m running fast, I’m usually stunned to get home and find out I’m slower than I thought.

I’m the kind of person who finds it hard to hope because disappointment, to me, is the worst feeling. So I wavered from ‘sure I can do it’ to ‘you’ll never do it, who are you kidding’ to ‘don’t be so worried about time, just have fun’ and variations thereof. 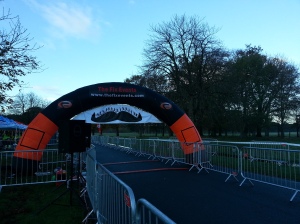 I stared at the finish line for a bit, to me it was significant. A nemesis of sorts.  I took a photo and tweeted “The finish…will I cross it in under 40 mins, That’s the big question!” The response was brilliant, so many people encouraging me and wishing me luck for the race and believing I could do it.  It was amazing and really lifted my spirits!

It also helped to bump into some people I knew, @MarkHavel1 and his fiancée, running the 10k.  I told them about how I wanted to run this in under 40 minutes, and they were really supportive and encouraging.

It wasn’t long before we 5k runners headed for the start line after a warm up (which I watched) and shortly after 10am we were off.

The first km for me was…was….hard to describe.  My legs felt heavy, like they were made of lead but I managed to stay with the ‘pack’ of runners so thought I was doing well. But I felt like I was going so slowly.  I hadn’t even reached the first km marker and I’d written off the sub-40.  I was even imagining what I’d write for my blog about it!

But I kept going. I told myself that I was NOT going to stop running, I was going to keep going and BE HAPPY to finish because it was a beautiful day and a beautiful park and I was running! And I love running!

So I kept going. And before I knew it I’d come up to the 2km marker. And no sign of the 10k runners. That was a big deal for me. You see, the 5k start was at 10am and the 10k start was shortly afterwards.  Last year I hadn’t even made it to 1km when 10k runners were overtaking me.  This year, that I was past the 2k mark before I saw any 10k runners was a good sign.  I started to perk up, maybe I was doing better than I thought?

So with a renewed sense of confidence, me and my determination took off.  We ran up the hill, hitting the 3km mark, and kept going at the top. I refused to stop, refused to walk, refused to think anything other than ‘you can do this’.  I started to wonder what time it was, and if I might really make that sub-40 after all. It helped that my friend’s fiancee ran past me and yelled ‘You’re making good time!’  It gave me the kick I needed and I sped up a little, knowing I was closer to the finish than I was the start! I also loved that some fellow members of a running forum I post on yelled ‘Boardsie!’ as they ran past me (I wear my twitter name on my back at a race, that’s how they knew me. But I don’t know who they were! Hi back, boardsies, whoever you were!).

From 4k to 5k was the biggest mental battle of the race.  To slow down now, to walk, would probably take me over the 40 minute mark but I had NO idea what time it was or what pace I was running.  I had to just shut that part of my mind up, the part that wanted to stop and walk (the part that had already given up?) and concentrate on the finish.

You know in the movies when a character is reaching for something but it just stretches away from them until it gets further and further away? That’s how I felt about this finish line.  I could see it for a looooooong way and it felt that it was just never getting closer! But I kept going.

I kept going and crossed that finish line, all smiles and delighted I had finished. It had been a long, hard, but good year of running for me and this race, which last year meant so much to me, felt like a triumph, no matter what time I finished in.

Imagine my shock of joy when I checked my time and saw I had finished in 38.29.

I admit it.  I cried. Tears of joy! It took me a few minutes before my eyes cleared so I could take a photo of my time and tell my friends and tweet my joy. So many people who believed I could do it, I was overjoyed to be able to prove them right! I finished this 5k at least 4 and a half minutes faster than my usual time! I can’t even!

I hung around for a bit afterwards, to cheer on other runners and chat to my friends, and enjoy the post-race happiness.

The race itself was well managed, as usual. I got another headband, thankfully in a different colour from last years, and of course the medal which I will proudly hang with the rest of my medals.

After the race, I ended up walking home (another 5k), then went for my workout with @myptdotie, who has really helped me become a better runner! The workout was hard but I managed to do it (including 10 minutes on the spin bike. My legs!).  So after all that activity today, and the absolute SMASHING of my 5k PB, I am treating myself to a fire in the fireplace, a homemade pizza and a cold cold beer.  I’ve earned it!