Today was, for me, a pretty special day.  Today I ran 10 kilometers for the first time ever. Yes, you read me right! I finally ran 10k!

In fact, not only did I run my first ever 10k, but in doing so I also ran the 10k Flora Woman’s Mini-Marathon for the first time!

I don’t know what my official time was (Edit: My official finish time was 1:37:29!), but because this was my first ever 10k, it’s a total PB right? I know it was under 1 hour 40 minutes, so we shall see tomorrow how I did. I also know I didn’t break any personal records, my splits were all over the place and my average pace was slower than usual BUT for such a crowded race and a course I’d never run before, I think I did pretty good.

So how did it go? Well, it went like this!

My morning went as planned with what I wanted to eat and drink before hand. The race started at 2pm so I had plenty of time to get lots of water and fuel into me. I left home with loads of time to get to the start and in hindsight, I probably left too early!

I ended up waiting in my starting pen for an hour and a half, and it was kinda boring to be honest. There WAS good music and a radio host who came on once in a while to encourage people but for the most part it was just standing around. In fact, two girls close to where I was standing just sat down on the ground and pulled out some magazines to flip though! But, it was well organized and I can’t imagine the logistics involved in getting 40,000+ women into their starting pens and onto the starting line. 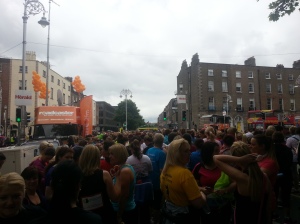 Crazy crazy crowds! There was no such thing as personal space at the start line. That was one of the toughest things for me; I don’t like being touched at the best of times so the press of people was hard to take. But, I had been prepared and knew what to expect so I was able to grin and bear it.  But when it was time to head for the start it was a relief!

So on to the race! I stuck to my race strategy pretty closely; I got over the starting line slowly, partly because I know it’s easy to start too fast, and partly to give myself a chance for the crowd to clear. (The crowd never did really clear, in case you were wondering.) I also ran on the left hand side of the road close to the kerb. That way when I passed people cheering I could pretend they were cheering for me. It was also less crowded along the edge which suited me just fine.

I figured I would run to 3k then walk a bit, but 3k came faster than I realised so I kept going! I was around 3.5 when I slowed to a walk, just to conserve energy.  I walked to 4k then picked up the pace a bit.

Oh, but from 4k onwards the race was agonizing! It was a long stretch of road at the top of which was a hair pin turn so as I was running I could see people coming back the other way; the agonizing part was not being able to see where the turn was! All I saw was a sea of people, and the stretch of road seemed interminable.  Turns out it was one and a half kilometers to the hairpin, and I tell you that was the longest one and a half kilometers I’ve ever run!

Luckily there was a water station partway through, this was a great distraction and I used the opportunity to slow down and walk for a bit. Big thanks to everyone manning the water stations! Great job!

I slogged on and finally, at 5.5k I got around the bend and turned back towards town. Psychologically this was just what I needed and I really gained a second wind here; knowing it was the ‘homestretch’ and I was facing towards the finish line made a big difference.

Between 6 and 9k I alternated between walking and running, until I got to 9k and just had to keep running.  Another water station at around 7.5k (I think!) helped and I used the same strategy of walking while getting water.

So at 9km with only 1km to the finish, by golly I was going to run it! And I did, albeit slowly, very very slowly! I think some women were actually walking faster than I was running!

Anyway, it really helped that there were people lining the streets to watch and cheer. I got high fives from a couple of kids and that spurred me on!

Heading up to the finish line was incredible; I couldn’t see it in the distance, but suddenly I turned a corner and there it was just a few hundred meters down the road…all I could do was tell myself ‘so close, you’re so close’ and keep going.  Crossing that finish line with the balloons waving and people cheering and me realizing what I had just achieved; is it any wonder I got teary eyed? I was so happy and proud and relieved! Getting that race medal was the best feeling. It was a real challenge for me, and knowing I did it and clutching the proof; it was pretty amazing.

I toyed with the idea of getting a massage but the queue was far too long so I skipped it. I ended up sitting on a kerb and tweeting my accomplishment and texting some friends who were waiting for news from me. I sat there still shaking with a combination of exhilaration and exhaustion; I could barely take the photo my hand was shaking so much!

I have really appreciated the support and encouragement from my twitter friends; you have been phenomenal! From the build up to the race, on race day itself the good luck tweets kept coming and my post-race tweet has over 45 favourites and more than 30 comments!  I’m getting emotional again just thinking about how much you all believe in me as a runner. Your support got me through the race, at around 8k I was remembering all your tweets from this morning; so thank you!!

I ran this race to support and raise funds for the Dublin Simon Community.  They put on a lovely post-race treat for us at a Dublin restaurant called Zaragoza.  When I got there I was given a lovely glass of Prosecco and a gift from a selection of gifts.  Then I was able to sit and enjoy some tapas and bread (and some peace and quiet!). The food was delicious and much needed! Thank you all so much for that! I have raised €250 so far for the Simons, I hope to get a little bit more from workmates and maybe some friends.

All in all I really enjoyed my day and the race. It was well organized with a good atmosphere (loved the various music spots along the route!) and lots of support from volunteers and marshalls.  The long wait at the start was a bit tedious but I suppose it was better to be closer to the starting line than farther back so I was glad I ended up where I did. The water stations were well spaced, with plenty of room to get water and well manned with volunteers. Kudos to whoever had to clean up all the cups!

To sum up, I think the best thing I can say about the race is this: I am definitely planning on signing up to run the mini-marathon again next year.